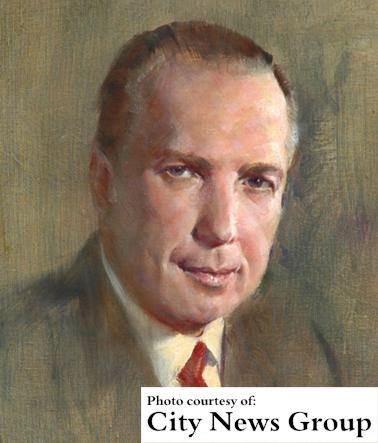 Harrison S. Evans, MD (CME Class of 1936), was born August 4, 1911, in Monroe, Iowa. While in medical school Harrison met and married Ruth Harding, a member of his class. He took a residency in psychiatry at the Harding Sanitarium in Worthington, Ohio, from 1936 to 1939. He then directed the psychiatry residency program at the Harding Hospital in Worthington, Ohio, until 1962.

During Dr. Evans’ psychiatric ministry, he once told a nationwide television audience on Art Linkletter’s “House Party” about the factors of habit and human nature that combine to make cigarette smoking hard to stop, and that it takes unshakable determination to end the dangerous habit.

Dr. Evans’ specialty training included a trimester in Neurology and Psychiatry at Columbia University and Psychiatric Institute in New York City in 1937; six months of postgraduate training with Cyril B. Courville, MD, in Neuropathology and Neurology at the Los Angeles County General Hospital and the White Memorial Hospital in Los Angeles, in 1939 and 1940, and personal analysis with Maurice Levine, MD, University of Cincinnati, from 1948 to 1952.

From 1942 to 1946 Dr. Evans was a Captain in the United States Air force at Drew Field Base Hospital in Tampa, Florida, and became a Lieutenant Colonel and Chief of Psychiatry for the 47th General Hospital in Papua, New Guinea; a United States Army unit staffed during World War II in large part by alumni from the Loma Linda College of Medical Evangelists. The American Board of Psychiatry and Neurology certified him in Neurology in 1941 and Psychiatry in 1946.

In 1962 Dr. Evans moved to Loma Linda University and became chair of the School of Medicine Department of Psychiatry until 1984, Dean of the School of Medicine from 1975 to 1977 and Vice President for Medical Affairs from 1976 to 1979. During his career, he became president of the National Association of Private Psychiatric Hospitals, chair of the Mental Hospitals Committee of the American Psychiatric Association, a life fellow of the American Psychiatric Association, and founder and member of the board of Worthington Foods. Considered to be “the dean of Christian Psychiatrists,” he received the Distinguished University Service Award from Loma Linda University in 1988.

During his tenure at Loma Linda University, Dr. Evans brought scientific credibility to the Department of Psychiatry and also provided excellent training to more than 100 resident physicians. His scientific-spiritual approach to psychiatry inspired the department and without conflict served both the University and the Seventh-day Adventist Church. He served on the faculty of the College of Medical Evangelists/Loma Linda University School of Medicine for more than 40 years.