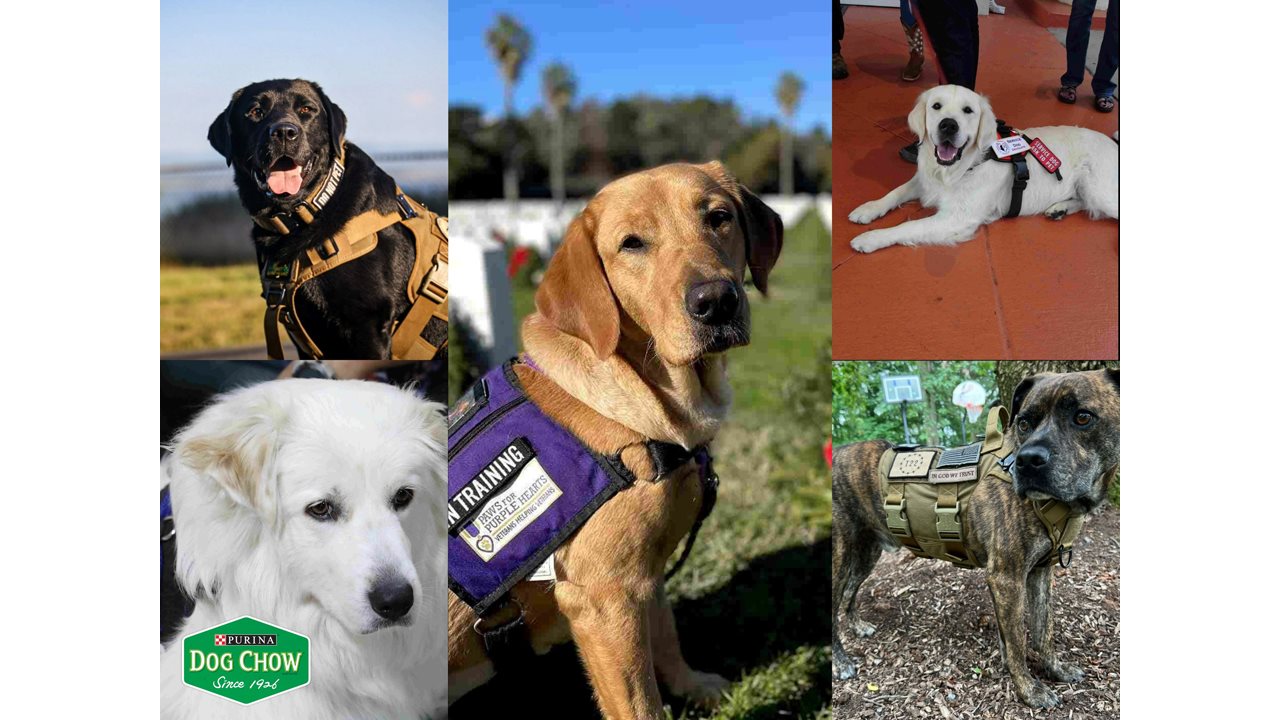 Service dogs are properly trained to lower the symptoms of posttraumatic stress disorder that are found in some of our veterans.

PTSD can severely affect a veteran's life, but there is hope for those who are impacted. Research shows that veterans with properly trained service dogs show lower symptoms of PTSD, reduced depression and increased social participation compared to those who utilize more traditional clinical care for PTSD alone. However, only 1% of those in need who seek a service dog receive one each year. Purina® Dog Chow® is on a mission to ensure more veterans in need can experience the life-changing benefits that PTSD service dogs provide.

This year, to highlight and celebrate the remarkable impact these dogs have on the daily lives of veterans, Dog Chow launched its first-ever Visible Impact Award in partnership with the Association of Service Dog Providers for Military Veterans.

Meet the five service dog finalists who are making life better for their veterans:

After U.S. Army Veteran Derek left his third inpatient treatment for attempted suicide, he knew he needed help to treat his complex PTSD. Everything changed when he met his service dog Bjorn, who helps him break out of negative thought spirals by interrupting flashbacks and thoughts of self-harm.

At night, Bjorn sleeps with or on top of Derek to help him sleep and wakes him if he's experiencing night terrors. "I have pushed myself farther than I have in a long time," said Derek. "I do so because I know that Bjorn will never quit on me. So, I can't quit on myself."

U.S. Army Veteran Todd was on the brink of ending his life when a well-timed conversation with a fellow veteran inspired him to apply for a service dog to manage his PTSD. Ivy, a Great Pyrenees service dog, was the companion he needed. "Ivy has given me a second chance at life," said Todd. "I now cherish every minute of every day since the day I chose not to leave this earth."

Ivy can smell changes in Todd's body chemistry when he gets hypervigilant, angry or anxious in crowded social situations. She quickly moves to bring him back to the present by interrupting his train of thought. When entering a room, Ivy will survey the environment, alleviating the feeling of threat before Todd enters a space, and if there is something in the room that could make Todd uncomfortable, Ivy will block him from entering.

After an explosive went off under his Humvee outside Kirkuk, Iraq, Army Veteran Carlos's life changed forever. Ten years after the incident, Carlos had trouble leaving his home and managing his PTSD symptoms. Since receiving his service dog, Liberty, Carlos has been able to enjoy everyday life again.

If Carlos is sitting down when he experiences anxiety, Liberty will perform deep pressure therapy by laying her two front legs and head down on Carlos's lap until he releases her. Because of Liberty, Carlos was able to overcome his anxieties and attend a Los Angeles Dodgers game. Liberty kept Carlos calm as they stood on the field and received a standing ovation from over 50,000 people.

Constant panic and anxiety attacks made life a daily struggle for U.S. Air Force Veteran Bernard. Even on medication, Bernard's PTSD caused him to become withdrawn and depressed, making simple tasks intolerable. His life changed when Raphael, an eight-week-old English cream golden retriever, "picked" him as his forever person.

Like other PTSD service dogs, Raphael performs a "standing hug" to give Bernard compression therapy when he begins to experience an anxiety or panic attack. This hugging happens for a couple of minutes and works to place Bernard's focus on Raphael instead of the anxiety trigger. Additionally, Raphael's ability to create a protective buffer in public spaces has allowed Bernard to reenter society and do things like go to the grocery store and travel.

After U.S. Navy Veteran Rebekah returned from service in 2011, she could not go out in public on her own. Luckily, her service dog, a rescued boxer mix named Trigger, helped reduce her PTSD symptoms.

When out in public, Trigger always remains by Rebekah's side, standing between her legs and decreasing her hypervigilance. Trigger inspired Rebekah to start her own business, which works to support other veterans struggling with PTSD and raises awareness of the fact that 22 veterans commit suicide every day. Thanks to Trigger, Rebekah is now able to speak to large crowds about her experience and how her service dog has changed her life.