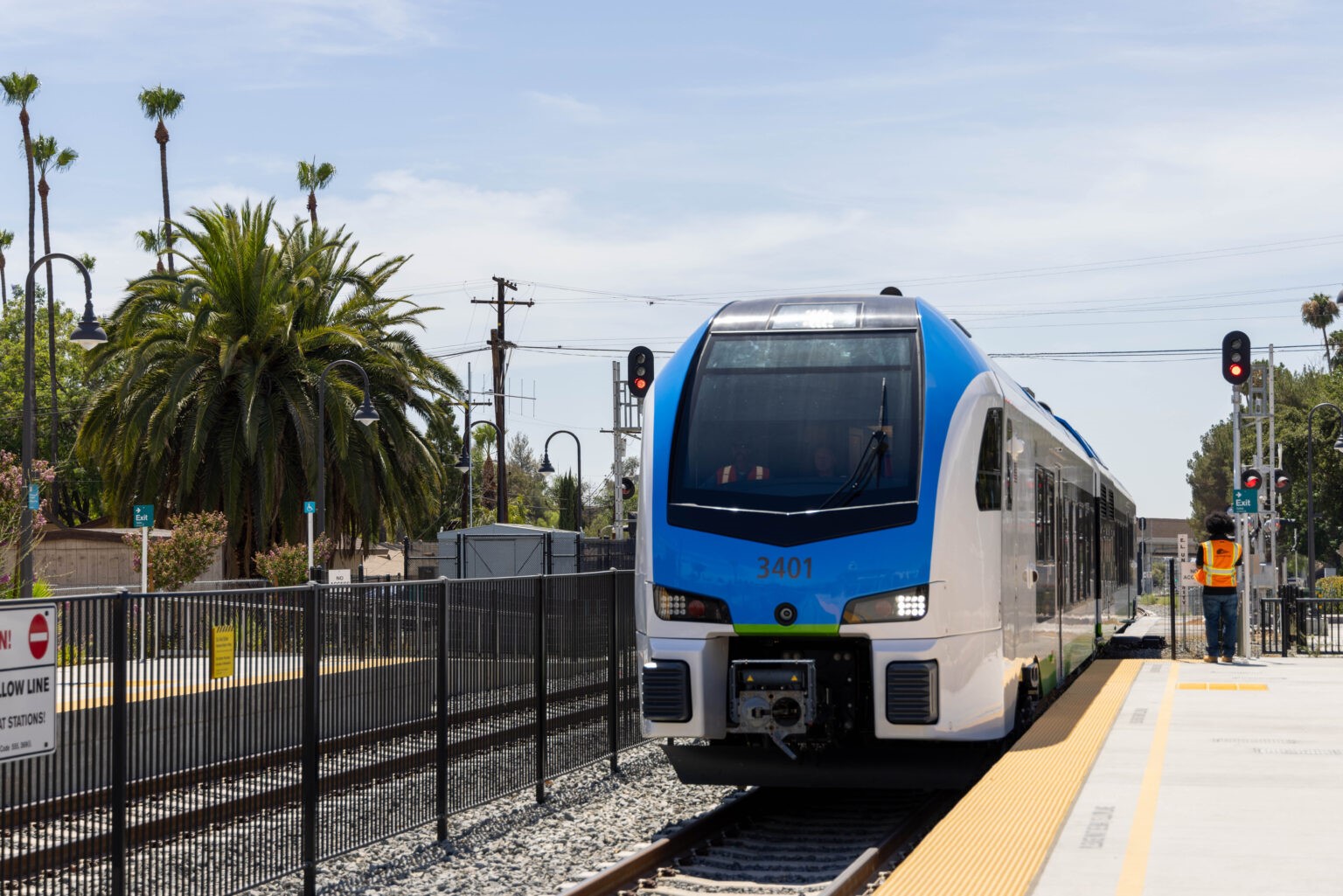 SBCTA is closing out its first 50 years with a variety of innovative transportation solutions, including the recently opened Arrow Line. By 2025, Arrow will feature the first hydrogen-powered zero-emission train in North America.

The “Poseidon Adventure” was No. 1 at the box office, “Killing Me Softly With His Song” topped the Billboard charts, “All In The Family” was far and away the most popular show on TV and San Bernardino’s legendary Swing Auditorium was, well, in full swing, with a spring concert lineup that included Fleetwood Mac, Deep Purple and Swing favorite Rory Gallagher.

Pop culture was thriving back in March 1973, and so was San Bernardino County, with a population that had swelled in excess of 700,000, a growing Cal State University campus that was about to launch its first master’s degree program, and a Norton Air Force Base that employed more than 20,000 military and civilian workers. Growth brought its challenges, too – notably, an outdated mid-century transportation grid that needed significant care and upgrading.

Determined to confront future needs, leaders from across the county formed the San Bernardino Associated Governments (SANBAG) in a formal ceremony in 1973, creating the platform and mechanism to attract billions of dollars in transportation funding over the next 50 years.

Today, the San Bernardino County Transportation Authority (SBCTA) – as SANBAG is now known – has emerged as a regional and national leader in bringing innovative transportation solutions to one of the fastest-growing population and economic centers anywhere.

“As current board members, we’re grateful for the vision and determination that our predecessors showed a half-century ago. Today, we confront similar challenges, along with some new ones, but are better equipped than ever to deal with them and improve the quality of life across our county,” said Art Bishop, President of the SBCTA Board and Mayor Pro Tem for the Town of Apple Valley.

Along with more cities, the county’s population has continued to grow, tripling to nearly 2.2 million today.

“We are fortunate to live in such a dynamic region, but as our own history has taught us, we need to continue innovating and finding ways to meet the needs of a population that is growing much faster than anyone could have anticipated,” said SBCTA Board Vice President Dawn Rowe, San Bernardino County’s 3rd District Supervisor.

SANBAG had little time to waste after its formal dedication. Almost immediately after its formation, the Southern California Rapid Transit District would shut down its east-west bus line across San Bernardino County. This incentivized local leaders to connect local bus services from one city to the next.

The agency’s early work was bolstered by the original state Senate Bill 325 and the one-quarter cent sales tax it authorized for transportation improvements. By early 1976, San Bernardino County had received $11.6 million in SB 325 funding.

Through the 1970s and beyond, SANBAG/SBCTA has taken a leadership role in addressing air quality issues, including endorsing annual smog inspections, promoting public transit, and enhancing our highway system to reduce congestion and the accompanying greenhouse gas emissions. It played a leading role in bringing Metrolink service to San Bernardino County in 1993, extending the 210 freeway from the Los Angeles County line to Redlands, and developing the nine-mile Arrow rail line from Redlands to San Bernardino. The latter, which opened earlier this year, represents the next generation of rail transit through an innovative multiple-unit approach that allows for the current low-emission diesel power pack to be replaced by a hydrogen-powered zero-emission unit currently under development.

Today, SBCTA also is on the front line of bringing a high-speed rail system from Las Vegas through the High Desert and into the recently rebranded Cucamonga Station. The agency also is seeking bids for a proposed transit tunnel between Cucamonga Station and Ontario International Airport.

“From the earliest days of SANBAG, our county transportation agency has looked for – and found –  creative ways to connect people and places across the largest geographic county in the U.S. This has also helped to fortify our economy by opening up new business opportunities, attracting more jobs and helping to establish us as the place to live and work in Southern California,” said Alan D. Wapner, President of the Ontario International Airport Authority and Council Member for the City of Ontario.

Significant funding also comes from Measure I, a half-cent sales tax approved by county voters – first in 1989 and again in 2004. Over those years, Measure I has funded billions of dollars and leveraged billions more in State and Federal funding in much-needed improvements across the county. The foresight and trust shown by the voters of San Bernardino County played a critical role in the positive growth of the region.

“San Bernardino County was ahead of the game when SANBAG was formed 50 years ago, and we remain ahead of the game today. As we address regional challenges, the collaboration and cooperation of our cities and stakeholders is as important as ever, and SBCTA is the vehicle to make that happen,” said SBCTA Board Member and former Board President Larry McCallon, Councilmember for the City of Highland.