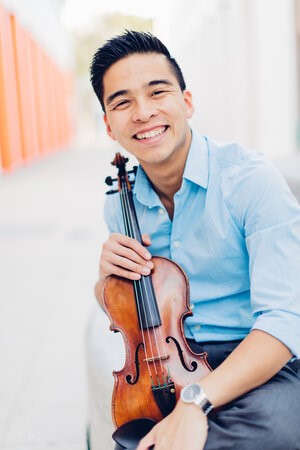 Acclaimed international concert violinist Miclen LaiPang is scheduled to return to Loma Linda from Germany for a concert of sacred and classical music on Saturday, January 7. The evening program will also feature regional keyboard artist Dr. Kimo Smith at the piano.

Both musicians participated in a concert at the same venue, Loma Linda’s Campus Hill Church, in June 2022. The upcoming January 7 concert will feature works by Schumann, Ravel, Ernst, Kreisler, and others, according to spokesmen for the church and the Calimesa Community Concert Series, who are co-sponsors of the upcoming event.

Concert tickets range in price from $10 to $50, depending on seat location, and can be ordered in advance online from www.iTickets.com or by telephone at 1-800/965-9324, explains Dr. Bob Soderblom, coordinator for the concert. Popular credit cards are accepted, he says, and doors at the historic Hill Church will open 30 minutes before the 7 p.m. concert.

From his Inland Empire Southern California boyhood, LaiPang has earned global recognition on his way to being called by the New York Times “a force to be reckoned with,” and by the German newspaper Die Welt as “a musician of daring virtuosity, with gripping access and noble elegance.”

Sharing the Loma Linda performance with LaiPang will be Dr. Smith, professor and former chair of the music department at La Sierra University in Riverside. Active as a recitalist, featured organ and piano soloist, and collaborative artist, he holds a Doctor of Musical Arts degree from the University of California, Los Angeles.

LaiPang is also a dedicated violin teacher whose students have advanced to the Juilliard School, Eastman School of Music, Carnegie Mellon University, Yale, Indiana, and other prominent institutions. At the January 7 concert, he’ll be performing on the violin made by Jean-Baptiste Vuillaume in about 1850 and once owned by Arthur Gramiaux and using a bow fashioned by Dominique Pecatte.

The Hill Church is at 11057 Hill Drive in Loma Linda, looking down from the elevation where Loma Linda University had its beginnings more than a century ago. Concertgoers can enjoy free parking at the church itself or in nearby parking areas, according to the sponsors.